In old age, Poppa is losing his words. He searches for familiar sayings and will often settles on one that is close, but not quite what he means. “Mobile home” becomes “truck.” The “dryer” becomes the “machine.” But I know it is not his language that matters most. Nan was the talker, the one who spent hours each day bent over the New York Times, circling typos and filling out the crossword. For Pop, what matters are the things that can be held in the hand. 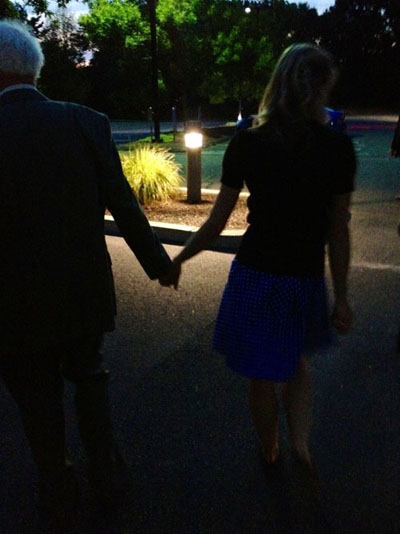 If his stories can be trusted, I don’t think Pop graduated from middle school. His vocabulary wasn’t stellar to begin with, studded as it is with slang and slanted by a heavy New York accent. Even before dropping out, he skipped school more often than he went and followed his uncles to their jobs on construction sites and the boat docks, studying instead small gears and arching wood beams that he could puzzle apart in a tangible way.

For every birthday and anniversary, Nan composed long poems on her typewriter. She would read them proudly in front of whomever was in earshot while Pop sat by, blushing and shaking his head. Pop searched the aisles for a storebought card that he thought expressed what was on his mind and simply sign, “Love, Artie” at the bottom.

Nana’s hands were small birds.  This is how I remember her: talking, always excitedly, her thin hands fluttering with the emotions that even the rise and pitch of her voice could not contain. And they were always freezing. Doctors would eventually call it “Reinart’s Disease,” but in my family it was diagnosed long before as simply, “Nana’s cold hands.”

They were amphibians, icicles even, the way they’d creep along the exposed napes of our necks. It was a game. Nan would say, “Do you want to feel how cold they are?” And we’d say, “No!” and try to get out of there as fast as possible because we knew that next she would grab our soft arms with one frog and brush the other along our neck and shoulders. Squealing with giggles we would wriggle away. Nan laughed and put her gloves back on.

After her funeral, in the days when Pop was most exhausted and searching for his syllables, each word that he uttered held behind it all of those he couldn’t, in that moment, get hold of.

She was a good woman, he said to me as we left the church and the casket had been closed. And I marveled at how much those five simple words could mean.

I imagine us picking words out of the sky like apples, and wonder how language would be different if it were a physical thing I could tease apart with my fingers. Like a round ball stuck in the throat, what if I could pick my words out and place them in a bowl on the table, or line them up end-to-end?

Words are bodies. We are envelopes that contain much more beneath the surface than we might assume or think possible in passing. Each definition holds a history, a trail that asks to be unraveled. We have stories to tell, we are always whispering in voices not always articulated. Our language aches. Just as our bones might run sore with weight or age or experience.

In the days before Nan died, when she was in the hospital unable to speak or open her eyes, it was her hands that did the talking. Pulling each of us close, bringing our fingers to touch the soft skin by her mouth, the rosary in her lap. Pop held one of them constantly.

Lover of words as I am, I like to believe that it’s possible for us to bypass spoken language. That time or sensitivity or necessity of the moment might allow us to transcend these awkward boxes of definition. That we might be heard and understood, regardless.

Because of Nan’s “cold hands,” for years she walked around wearing mittens in the house, two thermal packets tucked inside. Pop, ever resourceful and puttering, sewed two cloth pouches for the hot packs, to shield her bare skin from the plastic and chemicals.

This is how I like to think of her: mittened and smiling. Inside of her gloves, her fingers are moving like braille over Pop’s painstaking yet clumsy stitching. Something communicated, though small and unsaid.

I'm a writer and editor, and also a collector—of other people's kitchens, of heirloom recipes, of family secrets, and stories of all kinds. Read more about current and past projects here.

“To the Bones” is an experiment in shedding the excess padding that keeps me comfortable—whether that means turning off the AC and opening the windows, making from scratch instead of buying at the store, or looking someone in the eye when I don’t have (or don’t want or don’t know if it’ll help to) spare change. This blog is a celebration of scaling back—just enough to appreciate everything that I do have. Which turns out to be a lot. It’s a challenge to feel the world down to my bones, and document others doing the same. Read more about the cross-desert roadtrip that inspired the blog here.